Eyes of the Leopard Collection 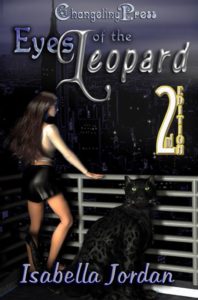 Say hello to the night.

All Nicole Stewart wants is to see the new black leopard at the zoo. But her visit sets her on a dark, sensual path from which there’s no return. It also brings Vitali and Ilia Kerensky into her life. The brothers are two of the few remaining victims of a centuries-old curse placed on their native village in Serbia. Doomed to live life half human, half demon-leopard, the Kerensky brothers pull Nicole into their strange world, shared with their sister Nadia and their nemesis, Mikhail Turgenev. Then there are the other. Americans, like Alex and Joey. and Nicole. Their frightening origins bring mystery and danger to them all.

You’ve never seen darkness ’til you’ve looked through the eyes of a leopard.

Buy it today from Changeling Press

4 1/2 Hearts!
“Jordan packs sensual, lust-filled steaming erotica into an all-too-short story. The plot always stays on focus and never becomes overshadowed by the sexual encounters of the main characters — who hold their ground and never fail to hold our interest.”

Nicole Stewart watched in fascination as the black leopard paced restlessly in his cage, his glossy coat shining in the sun. The magnificent creature was several feet in length, moving gracefully on long sinewy limbs that ended with enormous paws. He was obviously agitated. Perhaps it was the crowd that gathered about his cage or having to adjust to an unfamiliar environment. Nicole could feel his tension, could see it in the tight bunching of muscle beneath fur.

Yes, he’d make a wonderful subject for a painting, she decided.

As she maneuvered through the scattered crowd of visitors to get a closer look, she caught the black leopard’s attention. Large slanted eyes the color of amber riveted on her.

The leopard’s pacing ceased as he moved toward her with slow deliberate steps, stalking her. Nicole’s entire body was on alert as she stared back at the large cat. Fear rooting her to the spot as he intently sniffed the air, trying to catch her scent.

It’s me, Nicole realized with wonder and fear. I’m the reason he’s so upset.

Heat, intense and pulsing, washed over her body in waves, bathing her face. The large animal’s tangy smell nearly overpowered her as he resumed his pacing. Only now his body brushed against the bars of his cage as he moved back and forth. Sweat broke out on her forehead when the animal stopped again to glare at her. His ears flattened against his head and his large mouth stretched open in an evil hiss, revealing a mouthful of sharp teeth. Nicole’s heart lurched in her chest.

“Misha!” A tall, dark-haired man in the traditional khaki uniform the zookeepers wore stepped before her, his voice guttural as he admonished the leopard in a foreign tongue.

Nicole hardly noticed as she backed away from the cage on legs that barely had the strength to support her. Under the other visitors’ curious stares, she made her way to a painted wooden bench several feet away from the leopard’s cage and sat down. Feverish heat continued to ravish her body, and her head began to pound mercilessly.

“You are all right?” A deep male voice penetrated the strange buzzing in her head.

Weakly lifting her hand to shield her eyes from the noon sun overhead, she glanced up into the most beautiful green eyes she’d ever seen. Emerald green eyes rimmed with golden flecks. She didn’t recognize the keeper, the man who’d put himself between her and the leopard, and she visited the zoo at least once a week to sketch. She’d remember a man as handsome as he.

He was tall and beautifully muscled with wide shoulders and slim hips. His black hair, cut neatly, was longer in the front, sweeping boyishly across his forehead. The same shade of black heavily fringed those incredible eyes with thick, glossy lashes. A faded white scar marred his tanned complexion, running from a point just under his left eye across his cheek. His lips were full and sensual above a hard line of jaw and an unyielding chin.
Everything about him from the hard planes of his handsome face to the confident stance of his perfectly proportioned body set her nerves on edge, made her restless.

“I don’t feel well,” she admitted as he joined her on the bench, his large muscular body moving with ease.

“Would you like some water?” His voice sounded muted in her head.

At Nicole’s nod, he pulled an old-fashioned canteen from the belt at his waist. Removing the top, he handed it to her, regarding her speculatively. His intense gaze never wavered as she took several sips of cool water, taking deep breaths in between. The water did nothing to squelch the strange heat. Rather, it seemed to intensify as he continued to watch her with those intense green eyes.

“You dropped this.” He spoke with a heavy accent. He held out the sketchbook she’d brought with her and placed it on the bench between them.

“Thank you,” she mumbled. She hadn’t realized she had dropped it. How could she, when she felt as if she were on fire inside? Heat coursed through her body like a river of hot lava. The pounding in her head continued relentlessly and she felt so… sensitive. Her fingers tingled — everything tingled. Nicole felt like jumping out of her skin. The white cotton shirt and faded denim jeans she wore were obscenely glued to her body by sweat, her tightened nipples hard little points that her bra couldn’t conceal.

Still forced to look up at him, though he now sat by her side, Nicole returned the canteen to him. “I drank most of it,” she explained apologetically.

“Are you an artist?” His voice was deep and soothing, but somehow it did nothing to calm her — to bring her to her senses.

“I’m an amateur,” she managed.

He smiled, an easy flash of white that messed with her insides, making her squirm in her seat. Nicole’s breasts felt heavy, her nipples began to ache and heat pooled low in her belly. “Are you any good?”

Nicole would have blushed had it been possible. His words were not meant as a double entendre. He was asking about her artistic talent.

At least she thought so. But there was a playful glint in his eye that made her wonder. He picked up her sketchbook and began to browse through the pages where she’d sketched dozens of animals from the zoo. He lingered on the sketches of the larger animals — the bears, the elephants, the tigers. His strong fingers lightly traced the tiger’s outline. He had large hands roughened by hard work and a number of white scars littered his skin. Incredible hands that oddly made her panties damp just imagining his touch on her body.