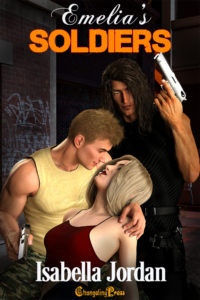 Tired of being taken for granted, Emelia Drake decides to confront her latest loser boyfriend. Instead of the satisfaction she hoped for, she finds herself caught in an elaborate and dangerous web.

Nick Cormac and Chase Turner seek to protect an innocent woman from the web of darkness that’s shattered their lives. The survivors of dark experiments and torture at the hands of a mercenary who wanted to create a legion of superior soldiers, Nick and Chase are part of an elite, highly-skilled group intending to stop the mercenary once and for all.

They know Emelia is too good for them and their world, but that doesn’t change the fact that they want her. Will they be able to keep her safe? How can they ever let her go?

“You never said what you do,” Nick threw out there. “For your job.”

Emelia smiled at him. “No, I didn’t.” When they were both eyeing her curiously, she nodded. “I work at the library. I’ve been there for five years. It’s a good job.”

She must have looked sad because she knew she would lose that job if she hadn’t already.

“I wish I could tell you how long it’s going to take to straighten all of this shit out,” Nick told her. “But I can’t. I’m sorry about your job. Surely there’s another library close by that would hire you. We can arrange an alibi or reference, trust me.”

“Because you’re private investigators,” she said.

Chase’s gaze shifted to Nick like that bit of information had been unexpected. Hmmm…

But he covered that surprise quickly. “He’s right. Maybe a new town, a new start is exactly what you need. Maybe you’ll meet someone new.”

“A non-loser,” Nick told her, reminding her of their conversation in the kitchen.

She shrugged. “Maybe. Or maybe I should just give up dating all together. Get a cat.”

“There’s things a cat can’t do for you, doll baby.”

Her face warmed at that while Nick shot Chase a look.

Maybe it was the wine that had her relaxed, but she had to laugh at that. “Scott couldn’t either.”

The two of them exchanged a look at that and she wanted to sink through the floor. Why the hell had she said that? Just because they were gay didn’t mean she could start talking sex stuff like she did with her girlfriends.

“Sounds like you need to make better choices,” Chase said simply, acting as if nothing unsavory had been said. “Doesn’t mean you need to have a commitment and the entire shooting match. Just find a nice guy who makes you feel good and who you enjoy spending time with. That’s enough, right?”

Shaking her head, she met his gaze. “See? Deep down I know that. But it’s not what I end up doing somehow. I end up meeting some guy and falling head over heels in love with him… Well, that’s what I tell myself. But they end up being the same creep dressed as different guys and I’m somehow surprised that they end up cheating on me. I’m there, every day, waiting to hear from them, wanting to spend time with them.”

Chase’s gaze moved over her slowly. It had to be the wine. If she didn’t know he was gay, she’d really be wondering about his motives.

“Next time, you need to have fun. Forget all the love stuff. If that happens later, it happens. But don’t go into it with that attitude. You’re better than that. Find someone who makes you happy without chasing them.”

She mulled that over as they finished dinner and she began to start cleaning up. They both joined in to help and they were done in no time, all walking into the living room. Chase poured her more wine, and she mentally made a note that it would be her last, while Nick set about building a fire in the fireplace. It was hot during the sultry South Carolina days of fall, but the nights were cooler than she expected. And she loved a good fire.

Leaving them the couch, she sank down into the stuffed chair closest to the fire.

They asked her what she’d watched, and she’d told them which led to a nice conversation about movies and TV shows. The fire was warm and combined with the wine, she was a little drowsy. Her eyes had just slid closed when Chase’s voice pulled her back.

“So what did you mean when you said Scott couldn’t either?” Chase’s gorgeous face was flushed from the warmth and the bourbon he’d been sipping.

Nick’s expression of surprise would have made her laugh if she hadn’t been so mortified.

“What did you mean when you said Scott couldn’t either?” Chase wasn’t letting it go. “You said you might get a cat. I said there were certain things cats couldn’t do for you and that was your answer.”

Emelia set her wine glass on the coffee table before her and pressed her face into her hands.

“Honey, don’t be embarrassed,” Chase’s voice was a low purr. Or was she imagining that in her wine-induced state? “We’re all friends here, right?”

Something had shifted in Nick’s expression too. The warm smile on his handsome face had faded, replaced with a look of longing. Or so she would have thought if he were straight. But he wasn’t…

Was she just really drunk and unaware of it?

Emelia didn’t look up. “Can we please just forget I said that?”

“Is it so hard to answer?” Peeking through her fingers, she saw Chase was amused at her reaction. “If you don’t clear it up for me, I’m just going to assume you meant the worst thing I can think up.”

With her hands in place, Emelia just decided to get it over with. “Then just go ahead and assume that’s what I meant because I did.”

When nothing was said or heard, slowly she lowered her hands to find them both staring at her curiously.

“You’re going to make fun of me now, aren’t you?” Emelia tried to make light of the situation.

“So he couldn’t get you off?” Chase wanted to clarify.

The heat staining her face was probably a dead giveaway.

“Hey,” Chase rose from the couch, coming over to kneel in front of her chair while she could just stare at him. He planted a hand on each arm of the chair and she eased back. “You’ve got nothing to be embarrassed about, doll baby. That wasn’t your fault. It was his. There’s certainly nothing wrong with you.”

Nick leaned forward on the couch, his elbows on his knees.

Emelia took a deep breath. What was wrong with her? They weren’t interested in her.

“When’s the last time someone was able to make you feel good?”

The heat coming off him seemed odd, but she willed herself to relax.

“I don’t think I’m going to admit to that,” she said grinning, trying to play it off.

“We can fix that for you,” Chase purred, his hands sliding off the arms of the chairs and up onto her thighs. She could feel the heat of his hands through the denim of her jeans.

Alarm bells went off. Then she was struggling to breathe. No, no, no…

“That’s… really very sweet,” she told him. “I mean it. And it hasn’t got anything to do with the fact that you guys are gay but…”

Again, Chase whipped his gaze back to Nick.

“What the hell have you been telling her?”

Now it was Nick’s turn to look uncomfortable.

“Doll baby,” Chase turned his attention back to her. “Nick and me? We’re not strictly gay. Nick’s never been with any other man but me and we both love women.”

“I don’t like labels,” Chase told her. “It used to be that when I wanted someone, if they wanted me back, I had them. Haven’t been with anyone aside from Nick in a long time though.”

His words had her insides clenching in alarm and desire at the same time.

They weren’t gay? That changed things…

“You’re saying you want me?”

One of Chase’s hands moved higher up her thigh, not far at all from her center that was beginning to ache. It was bad enough she’d been listening to them getting off the last two nights and now, what? They were inviting her to join them?

Her flesh was willing. That or Stockholm Syndrome was setting in.

Her mind was struggling to keep up between the incident with Scott, what happened in her apartment, and now the two really gorgeous guys who’d brought her back to her house that weren’t strictly gay wanted her?

“Both of you?” It didn’t come out as casual as she’d wanted it to.

“Is that a deal-breaker for you?” That hand moved higher still, and she could feel the wetness seeping into her panties now. “If you just want one of us, I’m sure we could work something out. But you can have both of us. We just want to make you feel good. We work very well together.”

Chase’s smile was breathtaking. “You mean a three-way? We have. We could make it so good for you.”

Nick had moved to the fire behind Chase, building it up.

“You can’t tell me you haven’t at least thought about it,” Chase continued charming her. “When are you going to get another chance? You can’t meet too many guys like us at the library.”

Eyes of the Leopard Collection »